How is Earth's climate recorded in minerals, rocks, sediment, water, and ice? How has climate changed through time? 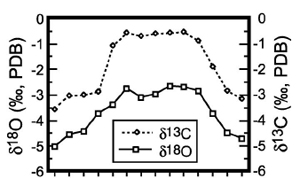 Dr. Bill Anderson studies how climate variations such as the El Nino - Southern Oscillation affect groundwater resources, with particular emphasis on groundwater-surface water interactions in a variety of hydrogeologic settings ranging from coastal aquifers such as the barrier islands of North Carolina and England to mountain streams such as Boone Creek.

Dr. Sarah Carmichael studies records of climate change in the context of mass extinctions preserved in sediments around the world.  What geochemical signals are preserved through a mass extinction?  Can these signatures tell us about how the mass extinction happened?  What factors influenced rapid changes in climate in deep time?  Click here for more information on this project.

Dr. Ellen Cowan's research is in glacial-marine sedimentology. Dr. Cowan documents modern glacial sedimentation associated with tidewater glaciers in the fjords of southeastern Alaska, and was part of the 56-member team of scientists who drilled through Antarctica's Ross Ice Shelf during the first project of the ANDRILL (ANtarctic geological DRILLing) research program.

Dr. Cole Edward's research focuses on the sedimentary record to reconstruct the interaction between the biosphere and environment throughout Earth's history. His work focuses on carbonate rocks and their geochemical signatures to reconstruct environmental conditions of ancient seas and climates.

Dr. Sarah Evans studies how climate warming affects water resources in cold regions where frozen ground exerts a primary control on the timing and distribution of surface and subsurface water flow. Her research employs numerical models to quantify changes in water flow due to frozen ground degradation and to better understand how heat and flow processes will operate in our rapidly evolving arctic and alpine landscapes.

Dr. Cynthia Liutkus-Pierce studies rift basin systems and their change through time. In North America, her research focuses on lacustrine and lake-margin environments of Triassic rift basin lakes in North Carolina and Virginia. Using thin section petrography, sedimentology, (micro)stratigraphy, and geochemistry, she is able to determine paleoenvironmental conditions during the life of the lake system. In East Africa, Cynthia studies rift basin environments that were home to our early human ancestors. Using sedimentology, stratigraphy, and stable isotope geochemistry, she is able to reconstruct past landscapes and determine what the area looked like for early hominins. Furthermore, she is currently working on two other footprint sites in Namibia that preserve early human traces in marginal marine sandstones. While these are not rift basin settings proper, Cynthia is able to reconstruct the ancient environment based on geologic properties of the footprinted sandstones.

Dr. Fred Webb (emeritus) studies sedimentology and stratigraphy, with a particular emphasis on the sediments of the southern Appalachians.