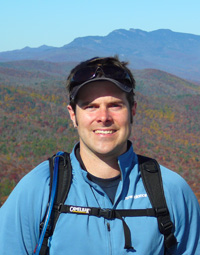 Dr. Scott Marshall, our resident geophysicist whose research involves fault modeling and how earthquakes occur, has provided the answers to some common questions about this earthquake and the possibility of other earthquakes along the East Coast.

We don't often get earthquakes on the East Coast. Why did this one occur where it did?

The earthquake occurred in what is known as the Central Virginia Seismic Zone (CVSZ). It is a known area of earthquakes (see the USGS hazard map on the VA EQ page above). This event is unusually large for the CVSZ, but the occurrence of earthquakes in this particular area is not surprising. Julia Irizzary '14, a quantitative geoscience major, compiled a map of East Coast seismicity as part of her independent research (shown below, click for larger image).

There is a diffuse belt of seismicity that generally follows the Appalachian Mtns. This is probably due to slip on reactivated structures in the App Mtns including old thrusts (from Africa's collision with us) and old normal faults which were active during rifting when Africa split off from us.

The best idea going is that ridge push from the Mid Atlantic Ridge is pushing the N. American plate westward and although the plate mostly just moves as a rigid block, ocassionally weak spots slip due to the Westward-directed push (i.e. EW contraction). This is, of course, still not very well understood and some disagree with this hypothesis. The focal mechanism suggests reverse slip on a ~NS trending fault, so EW contraction seems reasonable...at least for this event.

The area of seismicity just west of us is called the Eastern Tennessee Seismic Zone. I don't think that very much is known about it. 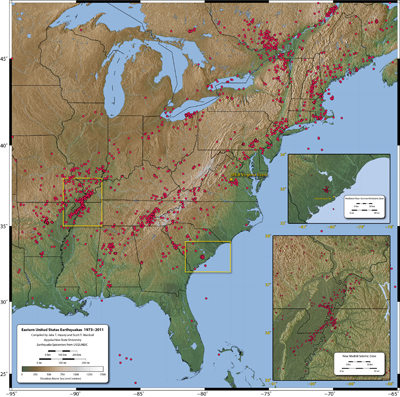 This earthquake was really far away from us - why did we feel it all the way in Boone?

Earthquakes away from plate boundaries are felt over distances up to 10x farther than equivalent earthquakes at plate boundaries with lots of broken rocks. This is due to slow wave attenuation in the less broken rocks in the east US. The fact that this event was felt from at least Atlanta, GA to Canada is a perfect example of this.

East US earthquakes almost never have surface rupture because even if they are moderate in size, the causative faults are all blind and mostly occur within basement rock.

For a similar period of time in ONLY southern California there were more than 6,000,000 earthquakes, while Julia's map of the entire eastern US had less than 2,000. That puts things into perspective. You can see the comparable California map (PDF) on my web site.

The United States Geological Survey (USGS) has the most up-to-date information on all US Earthquakes. The Mineral, VA information is located here. One thing you can do is to fill out a "Did You Feel It?" report on the web. This may seem silly, but this is actually how the USGS makes isoseismal maps (maps of equal shaking intensity). The maps can't be made if people don't fill out the reports. Just click on the M5.8 event from yesterday and the rest is straightforward.