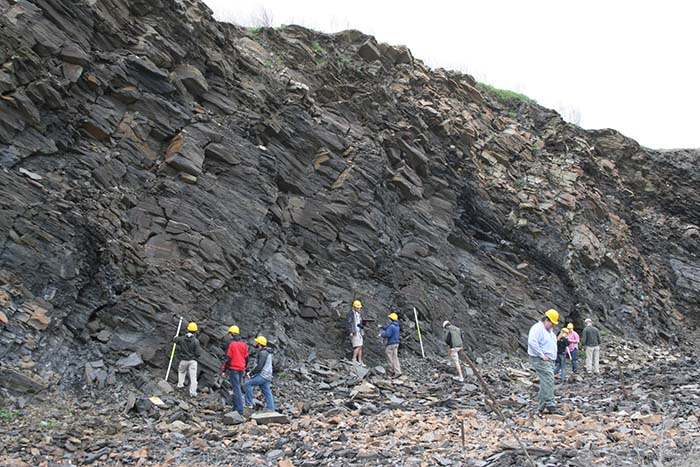 The Dan River-Danville basin is part of the Mesozoic rift system in eastern North America that formed during the breakup of the supercontinent Pangaea during the Triassic (Olsen et al., 1989; Schlische, 2003). The basin is an elongate half-graben with a southeast-dipping border fault system, the Chatham fault zone. The basin is ~170 km long and its width ranges from 3 to 15 km. The 4,000 m of tilted basin fill (Dan River Group) immediately overlie (unconformably) Proterozoic and Paleozoic igneous rocks, gneisses, and amphibolites, e.g. the Smith River Allochthon (Horton and McConell 1991).

The Virginia Solite Quarry is situated in the middle of the basin where it straddles the North Carolina- Virginia state line at Cascade, VA. 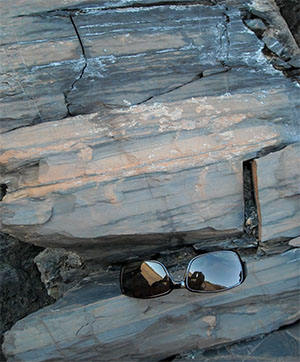 The Solite Quarry expose several hundred meters of the largely lacustrine upper member of the Norian-aged Cow Branch Formation (Meyertons 1963; Olsen et al. 1991; Kent and Olsen 1997). Within this Formation, bedded lacustrine shales, mudstones, and sandstones preserve Van Houten cyclicity, thought to reect changes in lake level and precipitation due to Milankovitch orbital changes that affect solar radiation. At the Solite Quarry, seventeen Van Houten cycles are exposed in Quarry B and each is ~10 m thick (Olsen 1986). The outcrops within the Quarry are well exposed and students are encouraged to measure the stratigraphic section and critically examine and classify the rocks (mostly ferroan dolomitic shales and sandstones) in order to understand the lacustrine cycles.

The Solite sedimentary rocks are considered to be among the richest and most productive Triassic terrestrial sequences in the world (Fraser et al. 1996). The diversity of insects is particularly significant, but plants and vertebrates are also well represented. The lack of bioturbation and exceptional preservation of vertebrate and invertebrate fossils were previously thought to reflect anoxic bottom waters in a deep lacustrine system (Olsen and Johansson 1994). Recent work by Liutkus et al. (2010) suggests otherwise. They suggest that, instead, some of the fossil bearing sediments were deposited in shallow water during the initial transgression of a long-lived, saline alkaline, rift valley lake. The spectacular preservation of soft tissue and delicate features (e.g., insect wings, antennae) reflects a paucity of predators and bioturbation that is attributed to saline and alkaline water chemistry. It is also possible that sediment/water toxicity (alkaline, high F) from seep brines inhibited bioturbation and predation as well.

Horton JW, McConnell KJ (1991) The Western Piedmont. In Horton JW and Zullo VA (eds) The Geology of the Carolinas, Knoxville, The University of Tennessee Press, p. 36-58.

Liutkus CM, Beard JS, Fraser NC, Ragland PC (2010) Use of fine-scale stratigraphy and chemostratigraphy to evaluate conditions of deposition and preservation of a Triassic Lagerstatte, south-central Virginia. Journal of Paleolimnology 44: 645-666