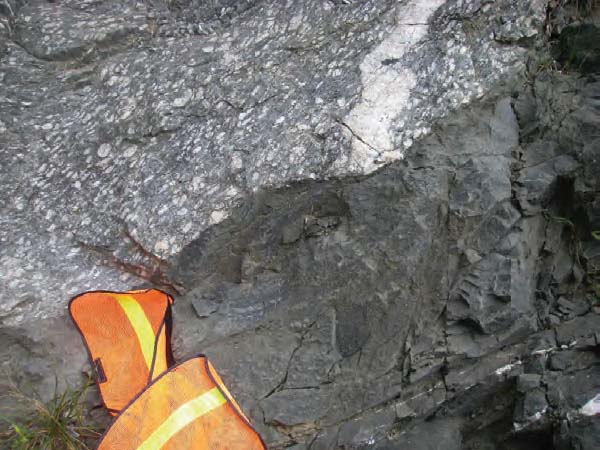 The well-known "Tweetsie Railroad" outcrop exposes Blowing Rock Gneiss and cross-cutting felsic and mac dikes presumably related to the same bimodal suite observed the New Roadcut Stop. Although these rocks record a complex deformation history as outlined below, even the novice geologist can discern cross-cutting relationships on the north end of the outcrop, where a late-stage basalt dike can be observed cutting earlier granitoid dikes that truncate early S1 protomylonite foliations in the Blowing Rock Gneiss. The south end of the outcrop exposes a younger, mylonitic foliation in the Blowing Rock Gneiss which is tightly to isoclinally folded. Late granitoid dikes cut the mylontic fabrics, but are locally folded with foliation-parallel to sub-parallel axial planes and/or boudinaged. Late stage brittle faulting can also be observed.

Sequence of Events to Observe

(based on observed rock types, fabrics, structures, and cross-cutting relationships noted in Wilson and Raymond, 2007).

(9) Broad mesoscopic, gentle folding, OR Late ductile-to-brittle shearing to the northeast. The late shears occur in all rock types.

(8) Continued ultramylonitization and folding (see photo H). Many granitoid dikes experienced continued shearing on planes crudely parallel to the foliations in the ultramylonite and have been ptygmatically folded and/or boudinaged.

(7) Intrusion of late syntectonic to post-tectonic granitoid dikes. Detailed sketch (C) shows one of these dikes cutting the ultramylonite before becoming transposed parallel to the ultramylonite fabric (event 8).

(6) Development of ultramylonite (S2) foliation that occurs along the south end of the outcrop. This deformation locally fragmented and ductily deformed the older basalt dike.

(2) Metamorphism with development of protomylonitic (S1) foliation that occurs along the north end of the outcrop. 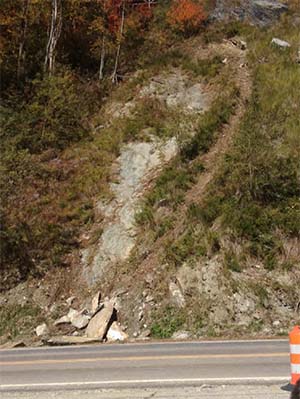 Students in Environmental and Applied Geology laboratories visit a landslide that occurred in December 2006 south of Blowing Rock, NC. Failure also occurred in 1973 before the road was widened. Students determine the evidence for the recent mass wasting event and hypothesize what factors may have contributed to slope failure such as thin soils, slope-parallel foliations, oversteepining of the slope due to road construction, and freeze-thaw. Students can also observe netting and terracing used to stablize the slope and discuss the effectiveness of each technique. The house on top of the 2006 landslide was built in 2007. The smaller rock slide seen along the right-side of the photo occurred in 2012.

Sequence of Events to Observe

(7) Formation of quartz veins in greenstone

Fetter, A. H., and Goldberg, S. A., 1995, Age and geochemical characteristics of bimodal volcanism in the Neoproterozoic Grandfather Mountain rift basin: Journal of Geology, v. 103, p. 313-326

Wilson, C. G., Raymond, L. A., and Love, A. B., 2008, Structures and deformation inside the Grandfather Mountain window: The Northern Goldmine Branch fault: Geological Society of America Abstracts with Programs, v. 40, no. 4, p. 11