Page by Benjy Strauss '16, written as part of an independent study. 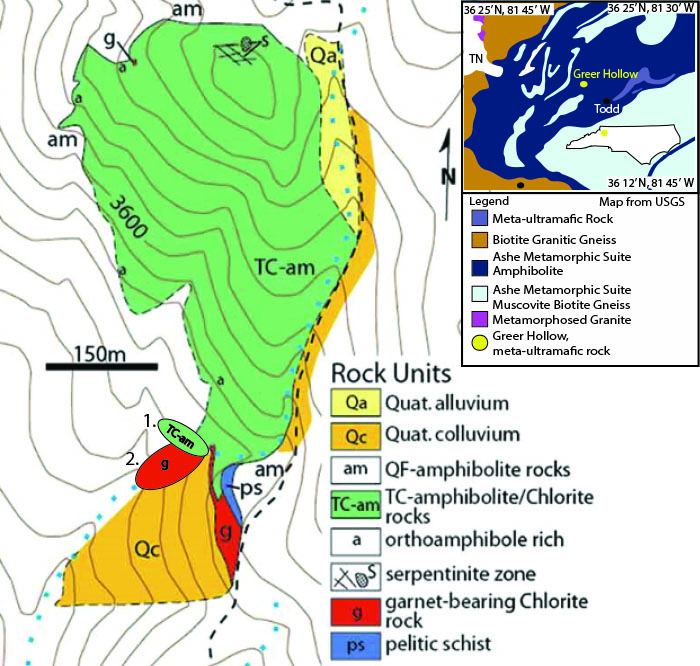 Figure 1. Map of the Greer Hollow body. Adapted from Raymond, et al. (2016) by Benjamin Strauss to include two new regions to the body, 1 and 2. 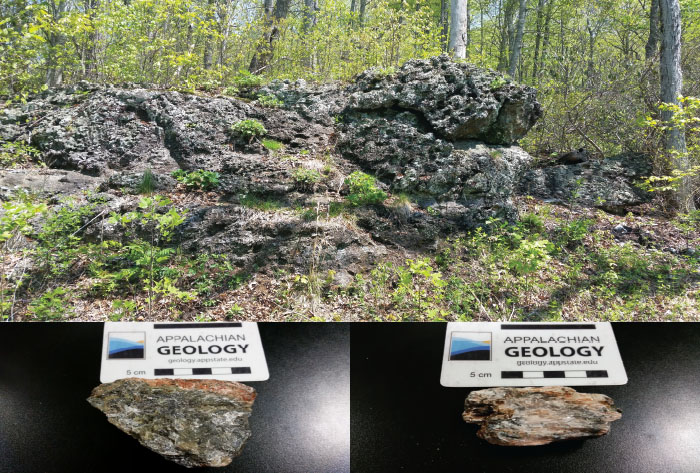 The top photo is of a large, heavily weathered outcrop of the metaultramafic schist found right off D&D Ridge Road. Two textural varieties were found in region 1. The rock to the lower left contains green tremolite, white needle shaped anthophyllite, small magnetite crystals, in a chlorite matrix. The rock to the lower right is mainly composed of anthophyllite with asbestos texture and small magnetite crystals. 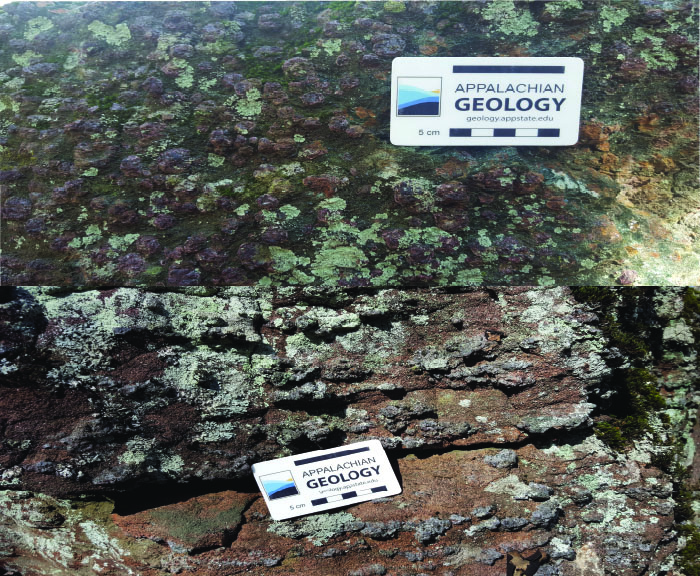 The garnet magnetite chlorite schist has two varying textures. The most common contains visible magnetite, 1-5 mm, and garnet crystals, 1-3 cm, with a dark green chlorite matrix (upper picture). The other body type is primarily composed of small garnets, around 1mm in size, with long corundum crystals, 1-10 cm, protruding from the body.

SEM photomicrographs were taken of the garnet chlorite schist. These images reveal other minerals not visibly seen in the rock in the field. Abbreviations for minerals are: As – aluminosilicate, Bt – biotite, Chl – chlorite, Cor – corundum, G – garnet, and Q is quartz. 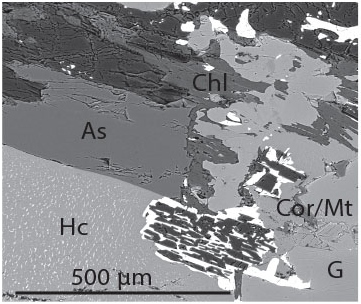 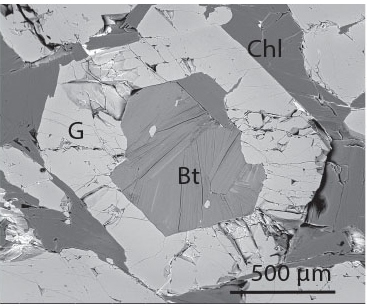 Figure 5. A garnet with biotite and chlorite inclusions. This was the only evidence of biotite found in the all the samples analyzed. 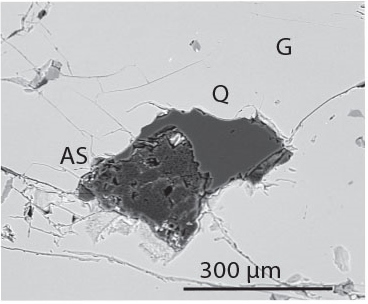 Figure 6. A garnet with aluminosilicate and quartz inclusions. Quartz was only found as inclusions within garnets, and never in the chlorite matrix.

Geologic History of the Region

The Greer Hollow body is found in the Ashe Metamorphic Suite (AMS) of northwestern North Carolina (Abbott and Raymond, 1984). The AMS is the base of the Spruce Pine thrust sheet, which lies on top of the Grenville aged Cranberry Gneiss (Abbott and Raymond, 1984). It is currently thought the AMS was emplaced during the Taconic orogeny (at roughly 500 Ma) and experienced retrograde deformation from the Acadian and Alleghenian orogenies (Raymond and Abbot, 1984).

How the AMS was emplaced is still up for debate, however the Greer Hollow body provides a glimpse into how the AMS, ultramafic bodies, and the Cranberry gneiss interacted during the emplacement. Raymond et al. (2016) analyzed the modal geochemistry of the Greer Hollow Body and compared it to other metaultramafic rocks from the region. They determined that ultramafic rock in the region cannot be classified into similar “types”, but rather each rock should be treated uniquely by their varying geochemistries and textures. They also found that the modal geochemistry of the Greer Hollow body is similar to blackwall rock from Vermont (Figure 7). 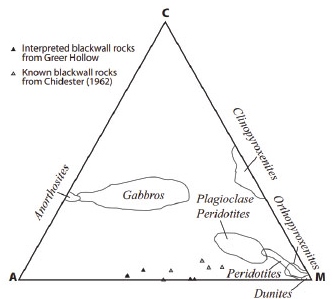 Blackwall rocks are bands of biotite, chlorite, and amphiboles that form at the contact between ultramafic bodies and quartzofeldspathic rocks. This banding forms as a result of metasomatic reactions caused by thrusting of the ultramafic body over the quartzofeldspathic rock, where chemical potential gradients between the silica and water poor ultramafic rock and the silica and water rich quartzofeldspathic rock form the varying mineralogical bands (Bucher et al., 2005). There are no large bands of biotite visibly seen in the Greer Hollow body, however the mineralogical and textural contrast between the garnet magnetite chlorite schist and the talc tremolite chlorite schist is similar to that of black wall zones. Also, the large corundum crystals protruding from outcrops could indicate an excess amount of aluminum that occurs in blackwall rock.

Retrograde deformation is made evident by thermometric data of eclogite and amphibolite found in the AMS. Abbott and Greenwood (2001) determined the pressure and temperature range at which the eclogite would have formed, seen in Figure 8. They concluded amphibolite facies metamorphism occurred post eclogite formation during the thrusting from the Acadian and Alleghenian orogenies. 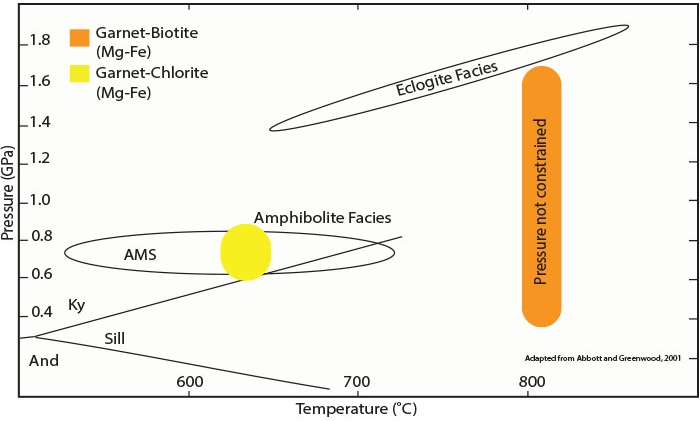 Equilibration temperatures were found for garnet/chlorite and garnet/biotite in the garnet magnetite schist of the Greer Hollow body. The garnet and chlorite equilibrated around 635 °C, similar to other amphibolite facies rock in the AMS. The garnet and biotite equilibrated around 800 °C, much hotter than other amphibolite facies rock (Figure 8). These two varying temperatures are evident of the varying degrees of metamorphism this rock experienced. Biotite and garnet can form at such high temperatures between 0.6 – 0.8 GPa in blackwall type rock with hercynite and excess amounts of corundum and water (Bucher et al., 2005).